Skip to content
As a power user, I prefer to use GNU/Linux OS for my personal daily driver. I don’t want to go with any specific distro but any Linux kernel base OS I use for at least 6 to 9 months then change another as an experiment.

Currently, I am using Ubuntu 18.04 on my 2011 Mac Book pro. Yes, I know why Mac book but ill explain simply no Mac OS in Mac Book, Just Linux OS git for settings and preference synchronization Use (i3 WM) for my preferred productivity work, other desktop managers and windows managers for Testing.

So now on the Booting issue first, after installation the system boot time is unnoticeable but then slowly the boot time started to increase after 4 months  so I decided troubleshot using

the first thing to notice is

then output using a command journalctl -b –unit systemd-journald

Output indelicate time spent on flushing and Journal size is around 1.4G up to 4G max but when I think the service is only used for debugging boot faults so use

Use a journalctl –vacuum command

Use Help From journalctl -h

–vacuum-files=INT Leave only the specified number of journal files

So the command will be 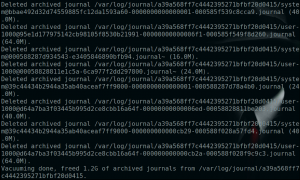 its persistent storage so according to man journald.conf 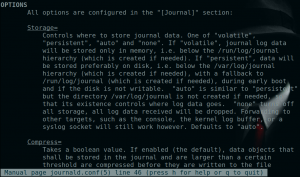 Controls where to store journal data. One of “volatile”, “persistent”, “auto” and “none”.

If “volatile”, journal log data will be stored only in memory, i.e. below the /run/log/journal hierarchy (which is created if needed).

“auto” is similar to “persistent” but the directory /var/log/journal is not created if needed so that its existence controls where log data goes.

“none” turns off all storage, all log data received will be dropped. Forwarding to other targets, such as the console, the kernel log buffer, or a Syslog socket will still work, however. Defaults to “auto”. 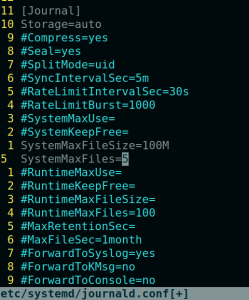 Then according to systemd developer 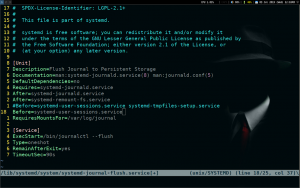